Who's Who and What's What in Arthurian Legend

Rather than trying to explain the origins and interrelationships of Arthurian characters and concepts within the discussions of individual comics works, I have provided the following glossary -- a necessarily brief overview of the major people, places, and things one is likely to encounter in Arthurian comics. Except as noted, descriptions are based on the most influential English-language version of the legend, Sir Thomas Malory's Morte d'Arthur. Additional sources include An Arthurian Dictionary by Charles and Ruth Moorman (Jackson, Mississippi: University Press of Mississippi, 1978), and The New Arthurian Encyclopedia (Ed. Norris J. Lacy, et al. New York and London: Garland, 1991). The alternative spellings are the most common ones and are not intended to be exhaustive. For more detailed information, please consult these works, or the online sources noted elsewhere.

An alternative version of this page, featuring different illustrations, is also available.

The name of Arthur's sister in Geoffrey of Monmouth's Historia Regum Britanniae and several other works. She is sometimes identified as the wife of King Lot and mother of Gawain and Mordred, who in Malory and other versions is called Morgause. In Antarctic Press' Warrior Nun Brigantia she appears as Sister Anna, the White Nun.

King of Britain, founder of the Knights of the Round Table, and lord of Camelot, whose legend may (or may not) be based on the exploits of an actual Sixth Century British warrior; the "once and future king" who is promised to return in Britain's hour of greatest need.

An otherworldly island to which Arthur is taken by Morgan le Fey and others to be healed of his mortal wounds after his final battle. Avalon figures significantly in several comics series, including The Elementals and The New Wave. Marvel Comics appears to have as many as three Arthurian Avalons in its fictional universe: the extradimensional realm of Prester John and Amergin first encountered by the Fantastic Four, and later by the Black Knight; the domain of the Green Knight that becomes the home of the Knights of Pendragon; and the last remnant of Atlantis, as depicted in Namor, the Sub-Mariner. (A fourth Avalon which appears in Marvel's Avataars: Covenant of the Shield is only indirectly related to the legend.) Avalon is also sometimes identified with the town of Glastonbury in England, where Joseph of Arimathea supposedly brought the Holy Grail, and where Arthur may have been laid to rest (as depicted in Camelot 3000).

Arthur's primary castle and seat of his court; generally used as a synonym for the entire Arthurian ethos and society, as in Camelot 3000 and Camelot Eternal.

Arthur's sword, given him by the Lady of the Lake, and returned to her upon his passing. Its mysterious origins and powers make it a potent symbol of Arthur's kingship and heroic status, as in Matt Wagner's two "Mage" series. In Matt Hawkins' Lady Pendragon, Excalibur and Caliburn are two different swords.

The Fisher King (or Rich Fisher) is a title given to the keeper of the Holy Grail in several versions of the Grail legend. He is usually portrayed as suffering from a wound which can only be healed when the Grail Quest is achieved. The Fisher King is a mysterious background figure in Matt Wagner's two "Mage" series.

The purest Knight of the Round Table, destined to sit in the Siege Perilous, and ultimately, to achieve the Holy Grail; Sir Lancelot's illegitimate son.

The brother of Gawain and half-brother of Mordred, Gareth is a loyal knight of the Round Table and a friend of Lancelot. He has rarely figured prominently in comics, although his most famous adventure, in which he accompanies a tart-tongued young woman named Lynette on a quest to rescue her sister, appears to have been retold in early issues of DC Comics' New Comics.

Nephew of Arthur, half-brother of Mordred; one of the greatest Knights of the Round Table. His most famous adventure is not told by Malory, but appears in the anonymous poem "Sir Gawain and the Green Knight". Among Arthurian comics series, Gawain figures most prominently in "Prince Valiant" and The Knights of Pendragon.

Illustration by Gary Erskine from The Knights of Pendragon.

According to Malory, the cup from which Christ drank at the Last Supper, and in which Joseph of Arimathea caught a few drops of his blood at his Crucifixion; in other versions, its nature and origins are more mysterious. In most versions, it has life-sustaining powers and becomes the object of a quest by Arthur's knights. A recent theory identifying the Grail with the bloodline of Jesus Christ, popularized by such books as Holy Blood, Holy Grail by Michael Baigent, Henry Lincoln, and Richard Leigh, and The DaVinci Code by Dan Brown, has influenced a number of contemporary comics, including DC/Vertigo's The Invisibles and Preacher, and Image's Heaven's War and Rex Mundi.

Queen of Britain and Arthur's wife, whose love affair with Lancelot helps precipitate the downfall of Camelot. Guinevere has generally played a passive role in Arthurian comics, with the notable exceptions of Camelot 3000 and Lady Pendragon. She appears in an unusually sinister guise in Slaine.

Lady of the Lake

A mysterious enchantress or fairy who presents Arthur with the sword Excalibur. In some versions of the legend, she is the foster mother of Lancelot. The title "Lady of the Lake" is also applied to Nimue, and sometimes to Morgan le Fey as well.

A weapon or artifact associated with the Holy Grail. In some versions of the Grail legend, it is identified as the weapon with which a Roman soldier (Longinus) pierced Christ's side as he hung on the cross; it is also sometimes the weapon with which the Dolorous Stroke is made, wounding the Fisher King and creating a Waste Land. (In a Martin Mystere story, the Holy Lance is identified with Excalibur). In comics, the Lance is often referred to as the "Spear of Destiny", a name apparently derived from the title of an ostensibly nonfiction book by Trevor Ravenscroft which speculates on Hitler's interest in the artifact, which was supposed to have magical powers. It appears in this guise in such comics as Indiana Jones and the Spear of Destiny and Lady Pendragon. The Spear of Destiny also figures into a variety of comics (such as DC's The Spectre and Image's The Darkness and The Magdalena) which otherwise have no specifically Arthurian content. Since the legend of the Lance of Longinus seems to have developed independently of the Grail tradition, such comics are considered to be beyond the present scope of this web site.

"The best knight in the world"; the exemplar of the Round Table ideal, although his love for Guinevere prevents him from acheving the Holy Grail, and helps bring about the end of Arthur's kingdom. Several Arthurian comics creators have followed the lead of Roger Zelazny (in his story "The Last Defender of Camelot") in having Lancelot condemned to (or granted) an eternal existence following the fall of Camelot. (See entries for Britannia, Butcher Knight, and Iron Fist.)

Illustration by Dermot Power from Slaine: Treasures of Britain. 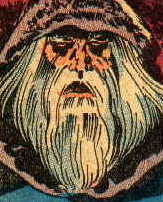 A magician and prophet who serves both Arthur's father (Uther Pendragon) and Arthur himself. Merlin's origins are mysterious; he is sometimes identified as the son of a demon. Merlin loses his power and liberty when he is seduced by his student Nimue. In most Arthurian comics Merlin is a benevolent figure, although he is occasionally portrayed as an ambivalent or villainous character (see entries for The Avengers, The Demon, Hellblazer, and Thor).

Illustration by Jack Kirby from The Demon.

Arthur's nephew, as well as his son by his half-sister, Morgause (or, in some versions, Anna or Morgan). Although a Knight of the Round Table, Mordred schemes against Arthur, Lancelot, and Guinevere, and eventually goes to war against his father. After Morgan Le Fey, Mordred is the most popular villain in Arthurian comics.

Arthur's half-sister, "the greatest enchantress now living", who schemes against Arthur and the Round Table, but also helps carry her brother to Avalon after his last battle. As her name suggests, she is sometimes associated with the realm of Faery. She is also sometimes identified as the mother of Mordred by Arthur, although in Malory, this role belongs to Morgan's sister Morgause. Although a number of recent novels have portrayed her sympathetically, in comics she usually takes a more traditionally villainous role. Morgan has in fact become well-established as a "second-tier" villainess in Marvel Comics' fictional universe, appearing as an adversary of the Avengers, the Black Knight, Iron Man, Spider-Woman, and others. She is somewhat less prominent in DC Comics' universe, being primarily associated with the Demon, although she has also encountered Superman, the Swamp Thing, and Wonder Woman. More sympathetic treatments of Morgan have appeared in The Black Dragon, Corto Maltese, and Slaine. Morgan appears in many other stories as well; she is, along with Merlin, perhaps the most frequently-appearing Arthurian character in comics.

Illustration by Steve Leialoha from Spider-Woman.

Another half-sister of Arthur; in Malory, the Queen of Lothian and Orkney, wife of King Lot and mother of Gawain and his brethren, as well as the mother of Mordred by Arthur. In some versions of the legend this latter role is given to her sister Morgan le Fey. Morgause appears prominently as the villainess in Marvel's Prince Valiant miniseries. See also Anna.

Merlin's protege, who tricks him, takes his magic, and imprisons him. Later, she assumes his role as Arthur's magical protector. Her comics appearances reflect the ambivalence of her portrayal in Malory; while a villain in Camelot 3000 and "Cagim", she is heroic in Marvel's Prince Valiant miniseries.

A royal title passed down from King Uther to his son Arthur. In later fiction (including comics), "Pendragon" may signify Arthur's royal authority (Lady Pendragon), his family line (Pendragon), his spiritual essence (Doctor Strange), or a more general supernatural power (The Black Knight, The Knights of Pendragon).

In Malory, a knight who achieves the Grail, though not as perfectly as Galahad; in earlier versions of the Grail story, Perceval is the one and only Grail Knight. One notable comics version of his quest is P. Craig Russell's Parsifal; another interesting take on Perceval's quest is offered in Camelot 3000.

The symbol of Arthur's order of chivalry; round, so that no knight has a higher place than another. The Knights of the Round Table are sworn to serve the cause of justice and mercy.

In Malory, a vacant seat at the Round Table, reserved for the knight destined to achieve the quest of the Holy Grail, at which no one else may sit without inviting disaster. In her fantasy novel Witch World, Andre Norton conceived of the Siege Perilous as a great stone capable of transporting someone to another world; comics writer Chris Claremont appears to have borrowed this interpretation for his stories of Captain Britain and the X-Men.

The love story of Tristan and Isolt, one of the most popular love stories of the Middle Ages, was originally separate from the Arthurian legendary cycle, but became associated with it by the 12th century. Comics treatments include The Search for the Girl with the Golden Hair, and the characters also appear in Camelot 3000 (in which Tristan has been reincarnated as a woman). Tristan's traditional foe Morholt appears in Mage: The Hero Discovered as the "Marhault Ogre".

Illustration of Tristan (as a man) by Brian Bolland from Camelot 3000.

Arthur's father, and King of Britain before him. In Malory, Uther sires Arthur on Igraine, who is the wife of one of his noble vassals, with the aid of a magical deception designed by Merlin. Uther appears most prominently in Abnett and Hampton's Uther, The Half-Dead King.

An alternative version of this page, featuring different illustrations, is also available.

Last updated 3/17/05. E-mail your comments and suggestions to the author, Alan Stewart .