The author is Alan Stewart, a librarian by profession, currently serving as the Collection Development Manager at the Memphis Public Library and Information Center. I graduated with my Bachelor of Arts degree in English from Mississippi College in 1979 and received my Master of Librarianship degree from Emory University in 1982.

I have been reading and collecting comics since 1965 and have had a strong interest in the Arthurian legends since 1973 or thereabouts. The material on these pages is largely based on my own collection, and reflects its primary focus on American comic books of the superhero genre published in the last four decades. I am not a professional scholar, and this web site has been created from the viewpoint of an amateur enthusiast, though it is hoped that scholars will also find it useful. As a librarian, I am as concerned with accuracy of information as any scholar, and every effort has been made to provide adequate citations for scholars pursuing primary source material, though I have chosen not to follow MLA style (at least, not consistently!).

The following bibliography lists the articles and essays I have written or co-written on the subject of Arthurian comics. More literature on this topic is listed on the accompanying page, "Printed Resources":

Slocum, Sally K., and H. Alan Stewart. "Heroes in Four Colors: The Arthurian Legend in Comic Strips and Books." King Arthur Through the Ages. Ed. Valerie M. Lagorio and Mildred L. Day. Vol. II. New York and London: Garland, 1990. 291-308. (Prof. Slocum writes about Camelot 3000, on which she is credited as a consultant. I focus on "Prince Valiant" and "Mage", while briefly mentioning other works.)

Stewart, Alan. "Camelot in Four Colors: The Arthurian Legend in the Comic Books." Amazing Heroes 55 (15 Sept. 1984): 80-97. (An extensive overview of the Arthurian theme in American comic books, based on my knowledge at that time, with detailed recountings of the histories of the Shining Knight, the Black Knight and the Demon.) 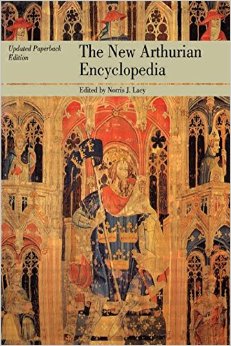 Stewart, H. Alan, and Siegrid Schmidt and Peter Meister. "Comics." The New Arthurian Encyclopedia. Ed, Norris J. Lacy, et al. New York and London: Garland, 1991. 97-98. (I present a brief overview of American comics; Schmidt and Meister discuss the German pulp novel series "Ritter Roland" mistakenly identified as a comics series -- many thanks to Dan Nastali for noting this error. The image reproduced here is from the cover of the 1996 revised paperback edition.)

Last updated 5/19/15. E-mail your comments and suggestions to the author, Alan Stewart .