Scholars with an interest in doing research in the field of Arthurian comics -- or anyone else interested in reading or collecting these comics -- face significant challenges. Most comics material (especially in the United States) has been published as disposable entertainment, on cheap newsprint, in periodical formats. Much older material is available only through the comics specialty market; those interested may wish to start with their local comic-book store. The Internet offers old comics hunters a number of options as well; some of these are noted in the "Online Resources" section.

Recent decades have seen more new comics material published in a more durable paperback or hardcover "graphic novel" format, and many more comics stories originally published as periodicals are being collected into trade paperback or hardcover collections. In the annotations of the comics discussed on these pages I have attempted to note the existence of reprint editions, which are likely to be more easily located (and more economically purchased) than the originals. A number of graphic novels and reprint collections (especially from the major publishers) are available through more general bookstores, while others will still need to be hunted for through the comics specialty market; again, there are many options online as well as through brick-and-mortar outlets.  Digital editions are also becoming more widely available, espeially of more recent comics.

In addition to the comics themselves, the following printed materials have served as sources for the comics information on this site:

In addition to the bibilography of the present author's works, offered on the "About the Author" page, these resources also address Arthurian themes in comics:

Popular Arthurian Traditions (Bowling Green State University Press, 1992), a collection of essays edited by Sally K. Slocum, includes two contributions dealing with comics. In "Thoroughly Modern Morgan: Morgan le Fey in Twentieth-Century Popular Arthuriana", Elizabeth S.Sklar cites Camelot 3000, Iron Man #150, Swamp Thing #87 and the 9th issue of the Official Handbook of the Marvel Universe (an illustated-text format miniseries), along with several films and role-playing games (including one based on "Prince Valiant"), to illustrate her thesis that Morgan's new importance as a villainess in modern popular versions of Arthurian legend represents a negative reaction to "escalating female empowerment" in this century. Jesse W. Nash, in "Gotham's Dark Knight: The Postmodern Transformation of the Arthurian Mythos", attempts to discern Arthurian themes in Frank Miller's Batman graphic novel The Dark Knight Returns (unconvincingly, in my opinion). 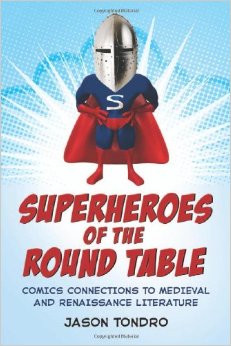 Another essay collection, King Arthur in Popular Culture (edited by Elizabeth S. Sklar and Donald L. Hoffman, McFarland & Co., 2002), includes a contribution on "Camelot in Comics" by Dr. Jason Tondro, another member of the Arthurian Comics Discussion List.  Dr. Tondro provides a perceptive and detailed analysis of a number of the Arthurian works described on this site, utilizing a system of five categories distinctly different from my own, but just as valid (if not moreso) and very useful.  He incorporates and expands on this material in his later monograph Superheroes of the Round Table: Comics Connections to Medieval and Renaissance Literature (McFarland & Co., 2011), which extends the scope of discussion beyond Arthuriana to the works of Shakespeare and others.

Arthurian Comics Discussion List founder Michael A. Torregrossa contributes an essay on "The Return of King Arthur in the Comics" to yet another collection, Adapting the Arthurian Legends for Children: Essays on Arthurian Juvenilia (edited by Barbara Tepa Lupack, Palgrave Macmillan, 2004).  As the title of the essay suggests, Torregrossa focuses on comics portrayals of Arthur's return, thematically classified as return through re-enactment (e.g, Excalibur), invocation (Captain Britain), or substitution (Corto Maltese).

Daniel Nastali, co-author of the monumental Arthurian Annals, has more recently written an essay, "From Camelot to Kaamelott: The Arthurian Legend in British, American, and French Comics", for the collection Medieval Afterlives in Contemporary Culture (edited by Gail Ashton, Bloomsbury Publishing, 2015).  Nastali's survey covers much of the same ground as Tondro's and Torregrossa's essays, but is distinctive in its inclusion of French language comics.

Finally, a number of additional resources (some of which I have not yet seen) are listed by Michael Torregrossa in the appendix to his bibliography "Camelot 3000 and Beyond: An Annotated Listing of Arthurian Comic Books Published in the United States c. 1980-1998" , itself originally published in printed form in: Arthuriana 9.1 (Spring 1999): 67-109.

Last updated 5/19/15. E-mail your comments and suggestions to the author, Alan Stewart .